The U.S. stock market has continued its recent ascent. As of this writing the Dow Jones Industrial Average (DJIA, or “the Dow”) has reached 28,000 and is near to another all-time high. At times like these it can be tempting to “take some money off the table” by reducing your exposure to stocks. After all, this sounds like a reasonable way to “lock in gains.” But a recent-run up in the market is a poor reason for altering your asset allocation.

The chart below plots the Dow’s monthly closing level since January 2006. Imagine it is February 2013. The stock market has just recovered from the greatest financial crisis since the Great Depression. Looking back it might seem a simple matter to have exited the market during October 2007, when the market had reached an all time high, and then to have re-entered it after March 2009, when the market hit bottom.

But identifying these turning points in advance is quite another matter. The red points denote new market highs at month-end. Since February 2013, the Dow has gone on to reach new highs on 34 occasions. We would ask hopeful market timers at which of these points they would have sought refuge by “taking money off the table?”

While market timing should be avoided, successful investing is by no means a “hands off” endeavor. Astute investors will pay attention to the relative value of their portfolio holdings and rebalance across asset classes as needed, following new additions and withdrawals, or when warranted when market conditions drive actual allocations sufficiently from target allocations. For more detail on rebalancing, see the September 2016 Investment Guide. 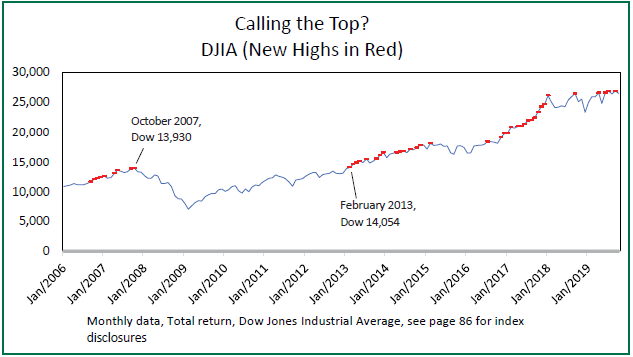 Also in This Issue:

To read more, subscribe to The Investment Guide. If you are a current subscriber, you will see Download and View buttons on the bottom of the page to access the entire issue.

AIS is a wholly-owned subsidiary of:

*Registration with the U.S. Securities and Exchange Commission does not imply a certain level of skill or training.

The information provided does not constitute investment or tax advice and it should not be relied on as such. It does not take into account any investor’s particular investment objectives, strategies, tax status or investment horizon. You should consult your tax and financial advisor. It should not be considered a solicitation to buy or an offer to sell a security. All material has been obtained from sources believed to be reliable. There is no representation or warranty as to the accuracy of the information and AIS shall have no liability for decisions based on such information.

Any mention of commercial products or reference to commercial organizations is for information only; it does not imply recommendation or endorsement by AIS nor does it imply that the products mentioned are necessarily the best available for the purpose.